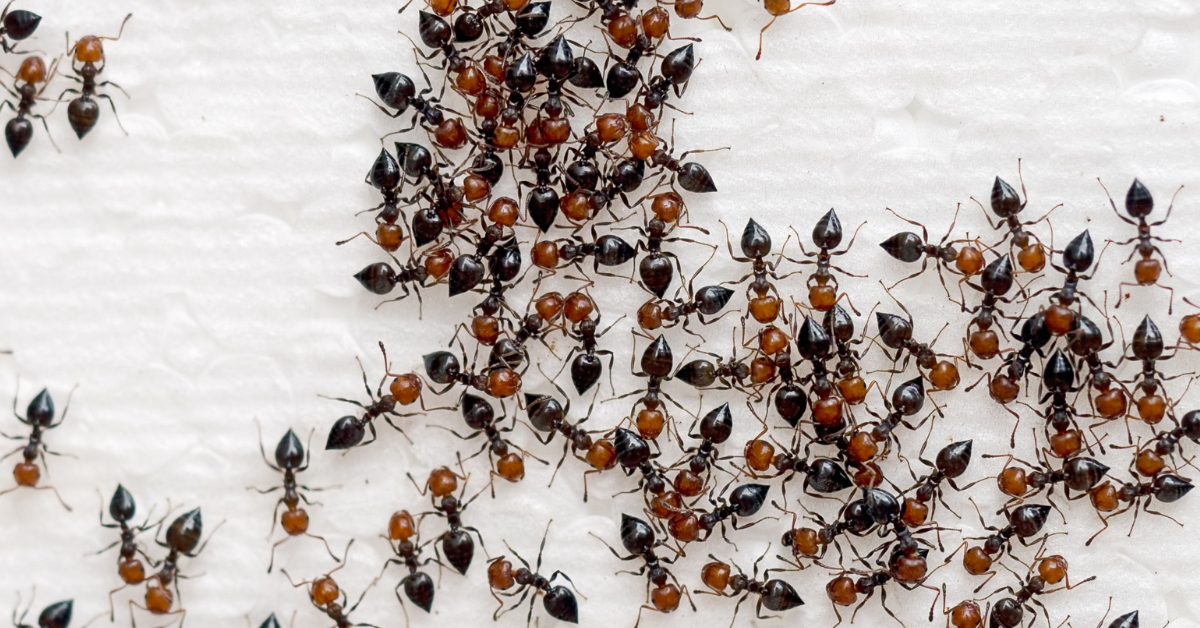 Have you ever let your dog outside to do his/ her business and noticed that ants have quickly appeared around the recent deposit of urine and wondered why?

Ants eat a variety of foods from readily available sources such as plant material (including grasses), seeds, human garbage, or spilt birdseed. Surely fresh urine is not going to be a great source of food for the ants. So why are ants attracted to dog urine?

There are a few schools of thought regarding this so, in this blog post, I will explore some possible explanations and give my verdict on what I think is triggering this seemingly strange behaviour.

What is Dog Urine?

Dog urine is very much like human urine – not only in function but in its makeup. Dog urine is generally made up of around 95% water and 5% organic waste materials.

This waste is usually made up of a variety of substances, including urea and creatine. It also includes uric acid, potassium, sodium, chloride, carbohydrates, enzymes, glucose, calcium, fatty acids, and ammonia.

A dog’s urine also contains hormones such as oestrogen or testosterone which can be detected by other dogs due to their exceptional sense of smell.

Why Are Ants Attracted to Dog Urine?

Ants are known to be attracted to dog urine and many other things around the home. The question is why?

Ants actually have an acute sense of smell that helps them find food, water, or anything they need for survival. They can detect chemicals in the air at concentrations as low as one part per billion!

With such a sensitive sense of smell, it is easy for ants to locate something they are interested in like when they come across something strong like pet waste.

Due to the high level of chemicals in the dog pee, it is extremely hard to pinpoint what exactly the ants are attracted to although studies suggest that there are 2 primary components that attract the ants more than the others – urea and glucose.

Urea is the chemical waste product of protein metabolism in mammals.

Urea is made up of ammonia and CO2 molecules integrated into a single molecule by the enzyme urease.

Urease breaks down the protein in food, to release this CO2 that becomes bound to four amines (NH3) to form urea’s nitrogen-containing heterocyclic ring system CPURO4.

Urea has many uses including as a safe means of fertilizer and as an additive for gasoline because its thermal decomposition exothermically releases NH3 which raises their boiling points; it is also used in adhesives, plastics, and other synthetic materials.

Why Are Ants Attracted to Urea?

Ants like to eat substances that are high in nitrogen and urea is a nitrogen-rich by-product of protein breakdown that provides a potent nutrient-rich signal to ants that allows them to detect it from a long distance away.

Glucose is the type of sugar that is the primary source of energy for the cells in most organisms, including humans, yeasts, insects, and some bacteria.

Glucose is an important substance for providing fuel to all cells in the body. Enzymes use it to create substances such as glycerol (a component of triglycerides), which are common building blocks of fat molecules.

It is often also stored as glycogen in animals or converted into animal fats – like cholesterol – which can be used internally or released into circulation.

Why Are Ants Attracted to Glucose?

The short answer is “Sugar”. The reason ants are attracted to sugar is the same reason humans like it too – sugar is broken down into what seems like pure energy.

Glucose is a simple sugar, and it is broken down rapidly in the body. Making it easy for cells, including ants, to break it down with minimal effort.

Should I be Worried About Ants on My Dog’s Urine?

As we mentioned above, the ants could be attracted to any number of the chemicals that are contained in the excretion of urine, but it is likely due to the high urea content or the presence of glucose.

Urea is a major component of pee, but glucose content is not usually very high when excreted through urination and could be an indicator of a more complicated health problem.

High levels of glucose in urine could indicate one of a few different issues such as kidney disease, adrenal gland problems, brain injury, poisoning, and liver damage.

Another health complication that can cause high levels of glucose in urine is diabetes. Did you know that historically, Ants played a huge part in the discovery and diagnosis of diabetes?

What to do If There Are Ants on Your Dog’s Urine?

Firstly, do not panic as it could be completely harmless, and the ants are just attracted to the urea or another component of the wee.

Next, I would purchase some urine test strips (amazon link – opens in a new tab) to check for excess glucose.

There are many reasons why ants might be attracted to your dog’s urine, but the most common is simply because of these two chemicals. Urea and glucose. It usually is not anything to worry about unless you notice that they are there at unusually high levels or if it seems like something else could be going on with your pup’s health.

If you are worried about how high that glucose level is, you can purchase urine test strips to see if your dog’s levels are normal. Be sure to keep an eye on the amount of water they drink and their activity level as well.

Urine testing may not be for everyone, but it does provide some useful information about what might be going on with a pet and help diagnose an unknown underlying health problem such as diabetes or urinary tract disease.

“When testing your dog’s pee, wear gloves – you do not want to get it on your hands!”

“Make sure to test the pee more than once to see if the results are consistent!”

“If your dog’s pee has high levels of glucose, take them to see the vet!”

“If there is an unusually high number of ants on your dog’s pee, get some test strips to make sure your dog’s glucose levels are normal!”

Can ants tell if you have diabetes?

The short answer is no, ants cannot tell if you have diabetes. It is true however that ants can detect excess glucose in urine and historically ants were used to diagnose diabetes.

Ants are no substitute for seeing a medical professional if you are worried about high amounts of sugar in your urine.

What does glucose in a dog’s urine mean?

Excess levels of glucose in your dog’s urine could be a sign that your dog has diabetes and should be seen by a veterinarian to get a professional evaluation.

Are ants attracted to Dog urine?

Yes, studies suggest that ants are attracted to dog urine. This is thought to be due to the high urea content but can also be an indicator of excess glucose levels.

If you are worried, you should get some urine test strips or visit the vet.

Are ants attracted to urine?